Silence! Trains on the move

Noise is a major environmental issue since it affects public health. For people living near the railway, the sound of passing trains, even at a distance, can be a nightmare, especially in the middle of the night. Thousands of people are affected and traffic is growing all the time. SNCF Réseau is constantly taking steps to contain its noise, building this factor into all new projects.

According to a survey conducted in September 2014 by the French Market Research Group IFOP on behalf of the Ministry for Ecology, Sustainable Development and Energy in September 2014 on "The French and Noise", it would appear that transport noise is the main cause of discomfort for 54% of the population. 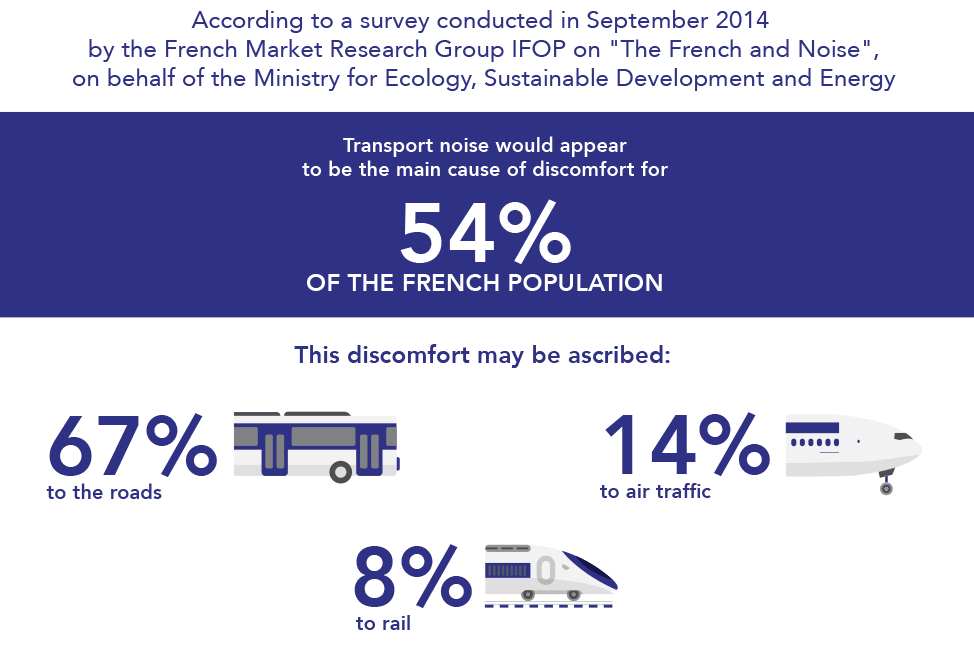 Railway noise is therefore perceived as less of a problem than that the noise of other modes.

It is nevertheless important to be alert to potential noise problems, maintain the momentum and on the look-out for new technical solutions to make rail a positive factor in the regions crossed by its lines.

Noise is caused essentially by rail-wheel contact, which is one of the challenges facing the railway as a system. Various factors come into play, these varying in relation to train speed. There are three types of noise:

To drive down perceived noise, action has to be taken on several fronts: rolling stock, infrastructure, track and operations.

Sound is propagated between a source (a railway line, for example) and a point of reception (a home, for example). It is between these two points that action can be taken to attenuate the phenomenon, by installing barriers or screens, building mounds or soundproofing.

Noise variations of 2dB(A) are barely perceptible to the human ear.

If traffic volumes double, all else being equal, noise levels will rise by 3 dB(A), which is just slightly above this level.

Noise is perceived to be twice as loud when the level increases by 10 dB(A).
Doubling the distance between source and point of reception reduces noise by 4 dB(A) each time.

Railway noise is covered by one of the sections of the 1992 Noise Act (Articles L. 571-9 and 10).
Maximum levels are stipulated for new and upgraded lines. These differ depending on whether trains operate by day or at night.

When new buildings are constructed close to existing lines, their soundproofing and insulation have to take account of the line noise categories stipulated by the local prefecture.

For existing critical situations (noise black spots), action plans have to be agreed with the relevant authorities over their elimination.

What is SNCF Réseau doing?

Depending on the configuration, SNCF Réseau works out the most suitable forms of noise protection for each particular case, with the agreement of local residents, communities and elected officials.

When projects require impact studies, the project owner has to submit a document entitled "Allowance for worksite noise" to the département Prefects and the local mayors in the areas concerned by the works and worksites. This document gives all relevant details of the type of worksite, its planned duration, the noise pollution to be expected and the measures taken to combat this noise.

Action taken with regard to rolling stock is the responsibility of the train operating companies. Generally, their actions are highly effective with noise gradually having been damped by an estimated 7 to 10 dB(A). An example: the replacement of cast iron brake shoes by shoes made of composite materials. But converting the French rolling stock fleet is a time-consuming process, especially where freight vehicles are concerned. 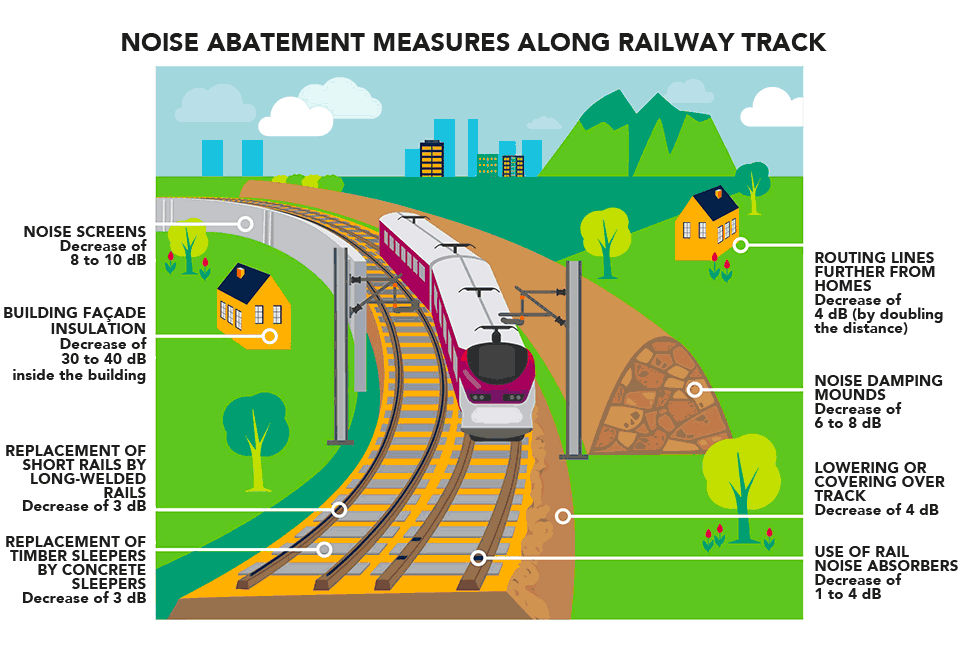 Traffic is very heavy in and around Paris, so noise is a problem that requires particular attention. Two bodies are involved:

SNCF Réseau is also a member of the regional association codenamed "Bruitparif", which monitors noise in Paris and its suburbs.

A special campaign is in progress to eliminate noise black spots. This is in line with national policy underpinned by the European Directive on environmental noise (2002-49-EC), which stipulates the need for strategic noise maps and action plans.

The campaign consists of locating the worst cases in order to schedule their improvement. As many as 58,000 buildings and 500,000 inhabitants could be involved.