Paris-Lyon: the pilot project for a high-performance high-speed line

HSL is France’s oldest and most heavily-trafficked high-speed line. At peak periods, traffic rapidly reaches saturation point. The slightest incident has an immediate knock-on regularity with thousands of passengers impacted by train delays. Its modernisation is not only one of SNCF Réseau’s priorities but also a priority for Europe, which has earmarked a €117 million contribution to its funding. Project aims are pragmatic: improved traffic regularity and punctuality, greater line capacity, even at peak hours, and adaptation to European standards (think "interoperability").

Today, 240 trains are worked each day on the busiest section of the line, making it the most heavily-trafficked in Europe. It handles one-third of domestic high-speed traffic including trains operated on major trans-European routes with Spain, Italy and the North of Europe.

And traffic on the line is heading for further growth in the coming years. But, in its present configuration, maximum capacity has been reached. With the advent of open competition, new operators are likely to bring an extra influx of train path requests. Something must therefore be done to boost capacity on the line.

Affording fair, safe and equitable access to the Paris-Lyon high-speed line for all railway undertakings, such is the challenge that SNCF Réseau has set itself. Its strategy consists of upgrading existing infrastructure by tapping into the latest technological innovations. From 2025, it will be possible to slot a further three trains into the timetable at peak-periods. Work to transform this corridor will act as a test-bed for more general efforts to boost performance and line throughput. 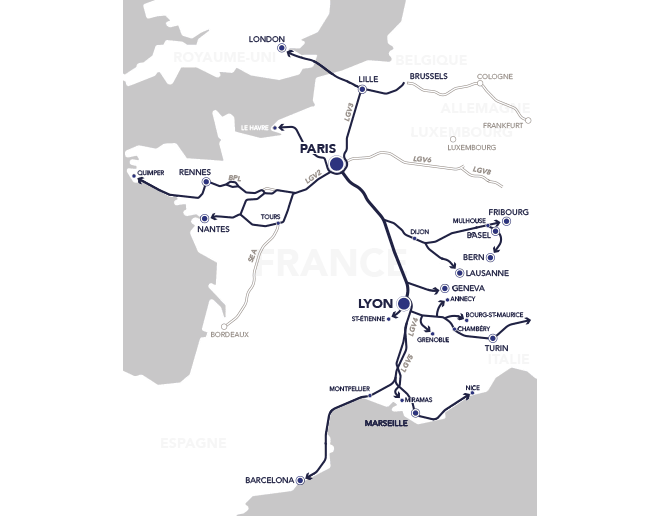 Already in use in other European countries, ERTMS (European Rail Traffic Management System) is the most advanced, most reliable and most robust signalling system in existence and, over the next few years, is scheduled to replace the 27 systems currently in service across Europe.

With ERTMS, train headways can be managed in real time, which releases greater capacity on the line, improves regularity and punctuality while providing the desired interoperability between European networks. At peak traffic times, the line will be able to handle 16 trains as against the present 13, courtesy of ERTMS.

This signalling technology is now about to be installed for the first time on a high-speed line in service without halting traffic flows. Investment will total over €600 million, which will cover:

Thousands of signal boxes and interlockings currently dotted across the country are to be controlled in future from a single point, a vast control room from which all traffic movements will be centrally managed. This should make traffic management more efficient, rationalise decision-making processes and make it easier to anticipate on potential incidents. Data will be processed in real time in a modern, ultra-connected control centre. With this new traffic control system, better orchestrated train movements will be the norm.

To improve train sequences on the Paris-Lyon high-speed line, SNCF Réseau is installing a new intelligent traffic control system: GOC 2.0. The system identifies trains that are running late, simulates the knock-on effects and proposes solutions to harness their impact on the line. Staff are then free to focus on train movement monitoring and incident management.